“Keep pushing, and make something people search for”

👆 That’s Sabba Keynejad’s message to Indie Hackers.
Sabba is the Co-founder of Veed.io – a browser-based video editing tool.
Sabba and his co-founder Tim grew the company from 0 to 50,000 users in just 6 months.
And with no marketing budget.
Their growth has been often compared to a rocket ship🚀
According to their Indie Hacker’s product page, their stripe verified monthly revenue is at $447K – that’s more than $5M ARR.
Back in March 2021, Sabba appeared on the Indie Hackers Podcast hosted by Courtland Allen.
They discussed the ups and downs of Veed’s journey, their rejection from YC, and the growth tactics they used.
Lessons👇

Veed.io is an online video editor. You can use it to add photos, subtitles, video filters, and other effects to your videos.
Veed is also one of the fastest-growing bootstrapped companies.
Sabba and Tim built Veed to make video editing fast, simple, and easy for even newbies. Most old-school video editing software was slow and clunky and desktop-based.
They were inspired by Giphy’s Gif editor that lets you make GIFs in the browser.
They wanted to do that for video.
This is how Sabba describes Veed’s value proposition –

“We just make it super easy to edit videos in the browser.”

Today Veed is at more than $5 million ARR.
But their start was very humble.
Sabba and Tim still had their full-time jobs and the tool could just do basic stuff like adding images, trimming, and cropping videos.
There was a time when Sabba quit his job to go full on the product and Tim paid him half his corporate salary.
They also hired engineers on contract for development work.
But they weren’t seeing much growth and had no way to monetize.
Things changed when they both quit their full-time job and applied to the startup accelerator Y Combinator.

Veed.io got rejected at Y Combinator.
The rejection reasons they received –
Sabba and Tim had quit their jobs for that YC interview.
And now they were rejected.
But they thought, they still had a chance.
So they reached out to their users with a paid plan, they wanted to get revenue over the weekend and pitch again on Monday.
They were rejected again on Monday!
But they got 10 paying users over the weekend.
Folks at YC wanted them to build the next Instagram, while Veed wanted to emulate Adobe’s success.
Sabba doesn’t blame them for it. He understands the risk private investors take and how their incentives are aligned.
But ever since that day Sabba has had a chip on his shoulder.
This is how he describes the experience –

“I don’t blame them at all. I’d probably do the same. It’s a strategic decision really on the company. I do have a bit of a chip on my shoulder from the whole experience, though. I probably always have a bit.”

Sabba and Tim could sense that people needed what they were building.Sabba pointed out that Inshot Video Editor has been downloaded more than 100 million times on the Android App Store.
And that iMovie was one of the most downloaded apps on the Mac App Store.
They just needed to get more eyeballs on Veed.
And for that Sabba and Tim used multiple channels –
There’s an interesting insight in one of Sabba’s blogs that talks about early growth depend on the type of company.
For tool companies, organic search is the primary growth channel, while for news and aggregator-type companies (think Buzzfeed) social media is the primary growth channel.
There are plenty of people searching for video editing solutions online.
To tap into that audience, Veed decided to avoid generic keywords like “Video editing tool” and instead targeted long-tail keywords like “how to edit Zoom videos” and “how to edit videos in iMovie”.
They built landing pages targeting such keywords and put them up on their blog.
And it worked.
These pages went from 0 to 20,000 hits in a space of 4 months.
They used a tool called Ubersuggest to figure out the long-tail keywords they needed to target.
The Veed team also produced videos targeting long-tail keywords to publish on their YouTube channel. YouTube is the 2nd largest search engine in the world.
It can be a major growth driver for tool companies.
Veed’s videos get 40,000 views every 40 hours.
Those are huge numbers.
And video is a way for them to educate their audience as well as market their product.
For example, this video on their channel is about how to add music to your YouTube videos.
It explains the process of doing it via YT, then explains how it’s limiting, and then discusses how Veed.io can help you do it better.
Neat!
Veed builds many small tools around Video recording and editing. These are free tools that plug well into Veed.
The strategy is to get people to use these free tools and promote the main paid tool through them.
Free tools help to get eyeballs far and wide. Paid tools usually don’t get as much reach.
Veed has released tools such as –
Screen recorder
Webcam Recorder
Voice Recorder
They even launched a Teleprompter app recently and made a huge splash about it on Twitter –
Sabba used to write answers on Quora and Reddit all day, and promote Veed in those answers.
The volume of the answers and their promotional nature often got him banned on both platforms.
Was it worth it? – Hell Yeah!
If he wrote 10 answers a day and got 20 people clicking on those answers – that’s 200 people coming on the site every day.
In the initial days that can be huge.
Sabba’s Quora profile is a lesson in content marketing. He has answered more than 100 questions about video editing there.

Sabba and Tim have put in a lot of hard work into Veed, but he thinks that no one should discount the role of luck in their success.
Being at the right place at the right time has definitely helped them a lot.
Sabba’s advice for Indie Hackers is to keep pushing and make stuff people are searching for –

“..Invest in SEO, probably if you’re a tools company and don’t give up, keep pushing and make something people search for.”

Let’s look at some Insights, Ideas, and Inspiration from Sabba and Veed’s story –

Bootstrapping to $3.3M/Year in a Competitive Space – The podcast that inspired this post.
How we grew from 0 to 50,000 users (with no marketing budget) | Veed Blog
Startups = Growth | Paul Graham
Sabba’s Indie Hackers AMA
Thank You for Reading🙏
Have thoughts? Join the conversation, I tweeted about this story earlier.
Every week, I share the most actionable insights and inspiring tips from Indie Hackers FOR Indie Hackers
Ideas + Insights + Inspiration for building profitable internet businesses💪
Subscribe to Listen Up! IH and join 1200+ spirited Indie Hackers who read this newsletter every week👇
SUBSCRIBE
Thanks to Seth King for editing this post.
Photo credit Spacex from Unsplash
Cheers,Ayush 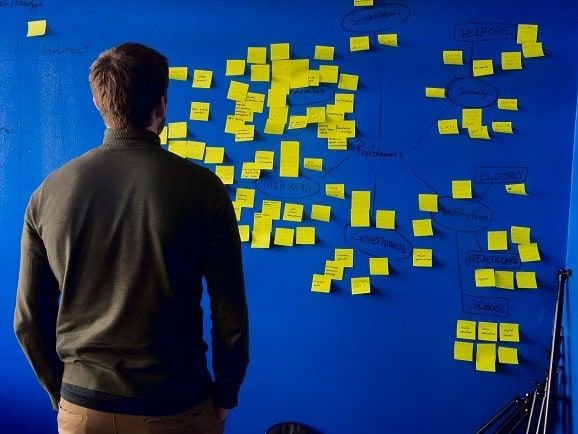 Ideas you can run with🏃‍♂️

“The most exciting business Ideas fit on the back of an airplane napkin” – Carmine Gallo 👆 That is the spirit with which every successful Indie Hacker business starts. Chris Justin and Eathan Janney understand this. They are the hosts of the “Run With It” podcast. On the weekly show, they discuss interesting business ideas …